September 7th-11th we were blessed to fly to Northern Ireland for our first tour there as a ministry!  Saturday night we sang at the Armagh City Hotel and Sunday at New Dawn Church.  As Randy says, We were absolutely spoiled this weekend!
Thursday we had the honor to visit, and have tea with, Councilor Audrey Wales MBE, Mayor of Mid and East Antrim Borough Council in Ballymena, Northern Ireland.
On Friday, our hosts took us to the North Coast to see the sights.  There, we saw Carrick-a-Rede.  It was a little windy but we had a great time!  If you follow us on Instagram, you can watch a short video of us walking across the bridge and see a glimpse of the beautiful scenery yourself!  (If you’re using the MTQ app, just tap on the “Photos” tab and scroll until you see the video.)  We want to thank Charles Robinson for making sure we were able to visit this wonderful sight! 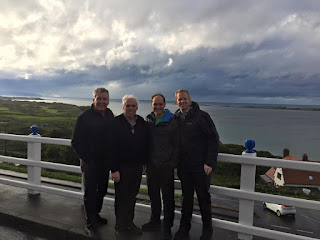 Friday was also Randy’s birthday!  We celebrated with our hosts and new friend, Linda, who was also celebrating her birthday. 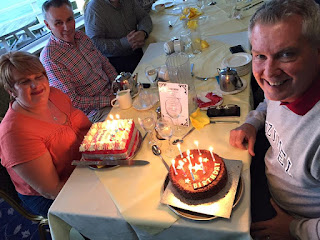 While we were in Northern Ireland, Nick wrote a thought provoking Facebook post on September 11th and what it was like to spend the 15thAnniversary of this day in a foreign land.
“We all remember where we were, and what we were doing, when we heard about the horrible attack on our country 15 years ago today.  This is the first time I have ever been to a foreign country outside of North America, and coincidentally, it has fallen on September 11th.  While some of our own are disrespecting our nation’s flag, stepping on it, burning it, and refusing to stand for it, the fine people in Northern Ireland waved it in this morning’s service.  They held a lengthy moment of silence in honor of those who were murdered that day and prayed for the surviving family members.  It is encouraging and refreshing to see the respect that was displayed by those who didn’t have to.  I wish more Americans were like them.” – Nick
Thank you Northern Ireland for a memorable weekend!  We made new lifelong friends and were blessed beyond measure by our time there!
View our Photo Album on Facebook here —>  Northern Ireland Photo Album
“I am overly blessed tonight!!!  The sweet people at New Dawn in Northern Ireland absolutely spoiled us this weekend!!!  We have never been treated better.  We came hoping to be a blessing but instead were the ones blessed.  I’ve never made a deeper connection with anyone so quickly!!!  We love and appreciate you all!!!  Thank you!!!”  – Randy 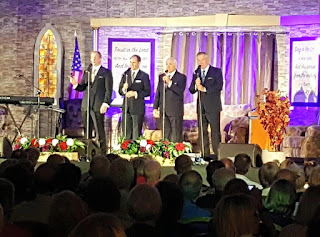