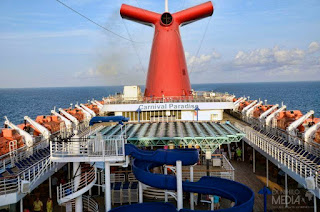 February 15-20th LaResa and I went on our 54th cruise in 37 years of marriage!  We always look forward to the time when we can embark on a vessel and see a different piece of God’s creation with His people.  The 2016 Singing at Sea Cruisedeparted from Tampa, Florida where we boarded the Carnival Paradise and left for a five day cruise to Grand Cayman, British West Indies and Cozumel, Mexico.  The weather was perfect in both ports!
Cozumel is Mexico’s largest island and though there are many shore excursions in port, this year, Carnival added several new ones to the mainland.  One was the “Mystic Ruins of Coba.”  A group of approximately 15 folks from the Paradise took this excursion and gave excellent reports! 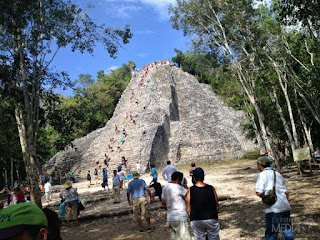 Though Chichen Itza has been named one of the Seven Wonders of the World, the Nohoch Mul pyramid located in Coba is the highest pyramid in the Yucatan Peninsula standing 138 feet.  It is also the only structure in the Yucatan that visitors are allowed to climb on.  Almost all the Paradise’s tourists climbed to the top to enjoy this amazing view… 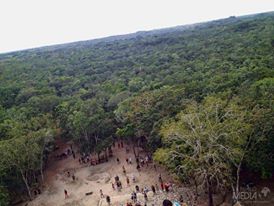 When Coba thrived (700-800 A.D.) the common people were not permitted to see this view.  To climb and be privileged to stand at the top of Nohoch Mul one had to be a ruler/king.  Up there, the ruler could look down on his kingdom and see what the jungle obscured from the ground below.
Our week at sea concluded with a program led by Jerry Goff with all the artists on stage participating.  Randy and the other bass singers were showcased in the old tune, “Just a Little Talk With Jesus” and I was honored to join in on a verse of Because He Lives.  As the last few notes rang out, Jerry Goff and John Pfeifer joined in with their trumpets for the grand finale! 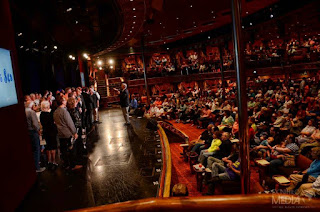 If you’d like to see more photos from our 2016 Singing at Sea Cruise – view our photo album on Facebook HERE!
These trips are a wonderful way to travel the world and enjoy the music you love all in one package.  I want to thank everyone who chose MTQ as their host on this year’s cruise; we would be thrilled if you would consider joining us in 2017.  Next year, the Singing at Sea is moving to a different ship, cruise line and ports of call.  On Royal Caribbean’s Enchantment of the Seas, we’ll sail to their private island of Coco Cay and one of my personal favorites, Nassau.  We hope to see you there!
You can find detailed information on our cruise page HERE.